Lauren and Josh celebrated their magical day across two beautiful venues, Fig Tree and Byron Bay Surf Club. Inspired by a modern romantic style, Lauren and Josh tied the knot with their nearest and dearest followed by the dreamiest beachside reception with dusty pink, white and hints of dark tones. In Lauren’s words ‘standing in front of all our friends and family and our dog, Oscar, declaring our love for each other, it was magical.’ Read their love story below.

Tell us your story, how did you both meet?
Josh and I met in Wellington, New Zealand when I was out with friends celebrating my birthday. Josh knew some of the friends that were with me. Although, I later found out that he had previously stalked my Facebook, so he knew exactly who I was when he approached us that night, haha!

How did the proposal happen?
The proposal didn’t go at all to how Josh had planned, thanks to me running late! It was Christmas eve and we were flying back to New Zealand to spend with family that evening. I had been working right up to the day we were leaving so I was running around doing last-minute shopping. Josh asked if I wanted to go for a picnic with our dog, Oscar, as we weren’t going to be with him for Christmas. I was running so behind that we had run out of time for the picnic which I thought wasn’t a big deal. I got home and Josh was really sweaty and had the aircon blasting. I asked him why he was so sweaty because it was freezing, and he got a bottle of champagne out of the fridge and said it’s because he had just run across the road to get this as he waved the bottle around. I asked if it was for our mate who will be looking after the dog and he replied, “no, it’s for us, to celebrate”. He was waving it around and I was so confused. I asked if there was something written on the bottle, why are we celebrating going to New Zealand? Haha. He nearly aborted the whole thing! He then pointed at the fridge that he had been signalling towards and written on the blackboard was ‘Will you marry me?’, he then got down on one knee and I just cried! It was probably the best way he could have surprised me as we had been together for 7 years at the time.

What style were you striving for with your table settings, florals and reception? Was there a certain look or vibe that you wanted to create?
I wanted the aesthetic to be modern romantic. My colour pallet was a mix of white, soft dusty rose and nudes with hints of dark dusty pink/maroon, dark foliage and black which really made the pink tones pop. We incorporated these colours in the cushions, flowers, napkins, arbour, table numbers and lampshades. I loved the long stem roses we had in our bouquets and wanted the reception to feel soft and romantic as well. I love crystals, my house is full of them, so we incorporated Rose Quartz and Agates on the tables. I also served Rosé and Pinot Noir from Pierre D’Amour that have Rosé Quartz crystals around the neck of the bottles! We brought our arbour down from Fig Tree to the Surf Club to have behind us at the tables which really added to the room. We brought in lots of foliage (palms, bird of paradise, fiddle leaf and cacti)  from Northern Rivers Plant Hire which really made the venue lusher.

Were there any particular vendors that you loved working with and why?
All the vendors were amazing; I couldn’t fault anyone! Josh and I particularly loved Jase from Lucas and Co Photography and Zac from Woven Motion. They were everywhere they needed to be, but not invasive which Josh really appreciated. Kirsten from May the E.K was so lovely and provided us with handheld fans and water. She also gave us that little bit of downtime to take it all in while travelling to our photo destination and reception. Wilderness Flowers did an amazing job with the flowers, they were absolutely perfect! Sarah Archer was so helpful with making the music work when we had to change our reception venue because of the fire which had burnt down Fig Tree. She organised Matt to DJ at the Surf Club after she sang at Fig Tree and also helped my friend who played when we walked down the aisle. You guys at Byron Bay Weddings were so amazing as well, from helping us change venues to having the arbour made for us from a picture I had found was so amazing! Our Celebrant, Kath, was also so helpful as we had Josh’s Aunty perform our ceremony. Kath was there for all the legal parts and she had all these little touches that made it perfect!

Overall, what was your favourite part of your wedding day and why?
It’s so hard to pick a single part, there were so many! The ceremony would have to be our favourite. Standing in front of all our friends and family and Oscar, declaring our love for each other, it was magical! The happiest and most fun day of our lives! 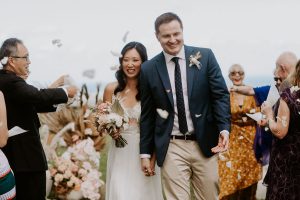 Meeting 9 years ago, Jady & James had an instant connection and hit it off from the get-go. Combining their lives, they decided on forever together and had their dream day at Byron View Farm. Mother nature turned it on just for them as the rains cleared for one day during this particular week so,… 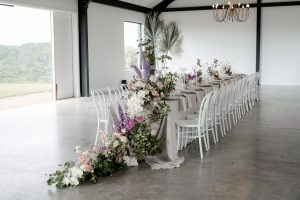 And just like that, another wedding fair has passed… and what a year it was! On Sunday the 7th February, we celebrated our 9th annual Byron Bay Wedding Fair with warm weather and beautiful clear skies.  Despite the ever-changing Covid uncertainty, the 2021 turnout was one of our best yet! A showcase of over 70… 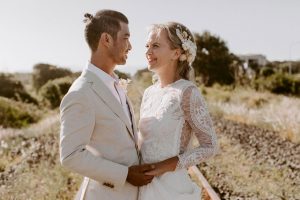 Over a decade after meeting on a warm summers night, Marge and Aidan went with a beach party vibe for their wedding at the amazing Byron Bay Surf Club. With multiple curve balls thrown at them (their original venue burning down and having a baby whilst trying to re-plan their wedding), Marge and Aidan truly are a story… 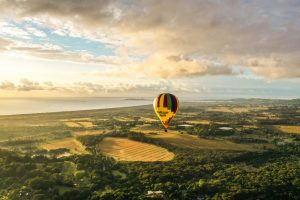 Byron Bay, a melting pot of health-conscious folk, hippie-inspired vibes, boho-chic fashion, vibrant arts and entertainment matched with a bountiful food scene. With beautiful beaches meeting the tropical hinterland, it makes Byron such a dreamy wedding destination like no other. With time before and after the wedding date, guests can explore, and discover a ‘Byron… 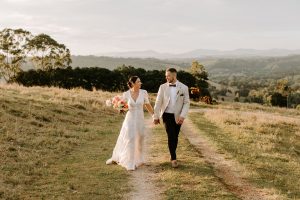 From highschool fling to the real thing, Prue & Luke are the ultimate love story. Finding happiness within each other after years of friendship, it was such a pleasure to be a part of their big adventure. Prue & Luke threw caution to the wind and gave their stylists creative freedom to play with texture… 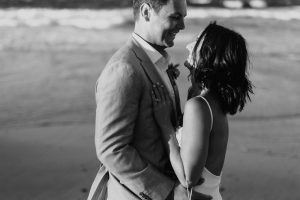 In Emily & Jason’s words, “we’re a New York City love story but we’re also two Sydneysiders who went all the way to the other side of the world to find each other”. This lovely couple had their dream Hawaiian wedding cancelled so their plan B was Byron Bay. They didn’t let that circumstance rain… 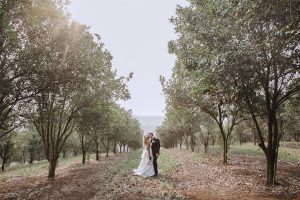 Grace and Chris were married at the ever so stunning Orchard Estate. A romantic ceremony was held in amongst the enchanting macadamia orchard followed by cocktails next to an old vintage caravan bar. Their reception resembled a luscious tropical oasis secluded from the outside world. A stellar team effort by the suppliers to bring their… 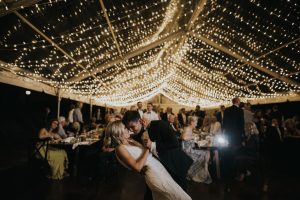 Billie and Jonnie recently escaped to Bangalow’s majestic Hinterland House for their intimate, down-to-earth, starry night celebration. It had all of us here at Byron Bay Weddings swooning. Jonnie proposed on the beach at sunrise and they married on the same day one year later. An ode to their country/costal upbringings, Billie and Jonnie let… 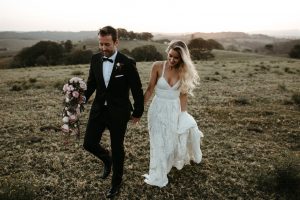 From roommates to lovers, Rachel & Aidan quickly fell in love soon after they became roommates and the rest is history! Their romantic rose garden wedding day was the perfect fit for them, from the Byron View Farm Cottage to the rose-filled bouquet. We loved being a part of this love-filled day! Read on to… 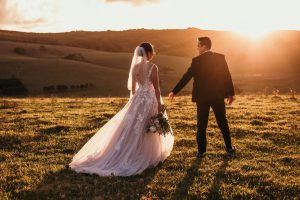 A beautiful wedding video will become your ultimate memento to flashback to every element of your special day. From the style and music to capturing all those raw emotions. A video allows you and your loved ones to relive the day for years to come. We present to you Byron Bay’s most talented and trusted…